Recommended reading for the martial arts. This is my personal library list. I practice Okinawan Te or "Ryukyu Ti." My system is derived from two others, one being the main influence of Shorin-ryu and the second Goju-ryu. The branch under Shorin-ryu is Isshin-ryu as developed by Shimabuku Tatsuo Sensei.

I wanted to create a library reference blog where I can provide a listing of the books I have in my library, present and past (past in that some have been lost in transit over the years). I will provide a graphic, if available, a short description, if available, and the bibliography. When possible a link to Amazon will be provided.

"Read not to contradict and confute; nor to believe and take for granted; nor to find talk and discourse; but to weigh and consider..." - Francis Bacon

Reader's of this Blog 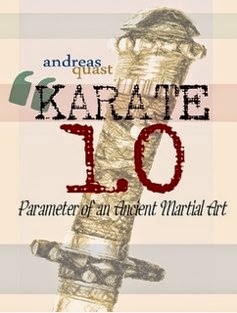 Impressions: I was only hesitant because I was ordering this self-published book from outside my normal channels for books, etc. I was also hesitant since it said it was a "hard bound" book. Most self-published that I have received tend to be spiral bound photo copy oriented books. Not to diminish one or the other but as a book lover I tend to gravitate toward books with nice bindings.

This was an impressive book publishing. First, the binding is very good. Similar to binding I have found on larger books that fit the description of "coffee table bound books."

I have paged through the entire book. I do this because I want to get a sense of what I can expect as I read. I am impressed once again at the perceived details of this book. It is well laid out, has excellent photos, tables, and other materials used to support the main content, the written word. I get a good sense because of the introduction and the page review this work will be a mainstay to the study of Okinawan martial arts, karate. I would put this one right up there with the history book on Okinawa by George H. Kerr as well as the Book of Martial Power by Stephen J. Pearlman. To me, karate would not be karate without the knowledge gained from the study of these two books - and I haven't even read the Karate 1.0 yet!

As I read the book, it is huge and detailed, I will provide my reviews in the next section. I am taking this extra effort simply because of who recommended this book to read and to the work of both the author Mr. Andreas Quast and the production of the Lulu press system.

Review: I have read through two chapters. It occurred to me that this book is not just about karate but rather about Okinawa and that includes their culture and beliefs. In the first two chapters I have discovered that the influences on Okinawa, its people and their culture and beliefs are vast, i.e. Chinese, Japanese, Korean and other Asian nations. This began long before the Satsuma 1600 invasion.

Another aspect I was not fully aware of is Okinawa's considerable military ability. This also long before the 1600's. It seems that the Okinawan's are similar to American's in the mix of cultures and belief systems that they were exposed to.

In a nutshell this books goes much deeper into the martial history of the island and as we later find in the ending chapters it had its influences on the karate of the times.

As I continue to read this fine book I find little tidbits of information that help connect karate to Okinawa history. Take for instance there is a reference to a type of device that uses the modern karate bo. It may be the precursor to the karate bo used today. It had a device on the end that used powder and shot to shoot a ball as a type of weapon. What it was called, etc. is not the point for this review. It is about your curiosity to see and learn more about the history and culture that produced karate.

Some other interesting tidbits from this book, karate was actually a prerequisite to weapons training. Ti has been confirmed as the all round term for the empty handed systems of Okinawa but there is also another older term that was used, you have to read the book to find out that term.

Empty handed systems were primarily a fitness and preparation system to learn discipline, etc. along with combat skills that were necessary for leaning weapons techniques, tactics and strategies. Read more in the book.

In reading this book I also came across the hachimaki color system used to designate officials of the court. I also spent some effort to try and discover the Okinawan belt system they created some where around the 1950's. I find that maybe the color of the belts may have been derived from their history, might. Worth reading the book to find out, right?

To close out this review, this book give me, personally, another perspective as to the origins and historical genealogy of karate of Okinawa. I can say that this book, if it is as accurate as I feel it is, redefines how I think of the history that brings us to the modern practice of karate. It answered some questions that always nagged at me from the subconscious. Considering that written history is not as solid as one might think then when references refer to dances and stories within you start to believe that historical information was kept by the Okinawans, just not in the form we would expect. This author has tapped into all the available sources making this a very solid book of history for me.

Almost done reading the first go round for this book. I would like to provide some interesting facts found within the pages:

The Bo and Sai were symbols of law and order; Bushi also means "masters of historical karate"; Channan, a person shipwrecked on the island of Okinawa, taught a number of kata to various Okinawan's that were handed down; Hanashiro Chomo (1869-1945) was the first to write karate with the modern kanji, soldier, gymnastics and karate teachers at the Shuri Middle School; Kusanku and Miyagi Chojun's reference to the transmission of Kenpo in 1828; Kumiaijutsu is a descriptive word or term for the Chinese Kenpo introduced to Ryukyuans in 1756 but the Chinese military officer, "Kusanku."; Kumiuchi-ho describes the methods of wrestling and scuffles of old style Martial Arts from the Kojo Clan that was based on Chinese techniques.

Overall, as I get closer to the end of this first read I must say that this book is a wonderful addition to your martial art or karate library. Get ready to have your understandings of karate and Okinawan history questioned. Get it today, worth every penny.
Posted by Charles James at 8:33 AM

Charles James
A place to discover new things for martial systems with specifics toward karate.